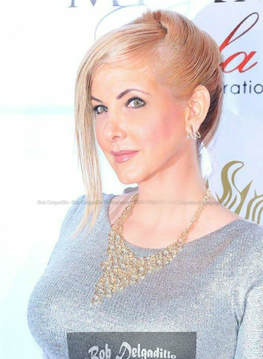 Sage built a name for herself in the film & event
arena as the Events, Programs & Marketing Director for IFP a resource for​ independent filmmakers, before branching off on an independent career.

The film, Ms Cutler, which Sage wrote & directed is selected to screen at the 2018 BEIJING FILM FESTIVAL. In 2014, Sage was on the GRAMMY ballot for the short film/long form music video 'GDLU', which she produced with GRAMMY award winning producer, 'Fanatic'.

You will always find Sage on both sides of the camera; she was a red carpet reporter/host OSCAR "Night of 100 Stars" at the Beverly Hilton Hotel, where she interviewed many iconic performers and city officials: Louis Gossett Jr., Lou Ferrigno, Ed Asner, Trace Adkins, Richard Lewis, Sharon Gless, Gloria Allred, Ron Galperin etc. Sage hosted the UNITED NATIONS 70th ANNIVERSARY and she is featured in; MALIBU CHRONICLE MAGAZINE, NEW YORK DRESS blog and interviewed for the podcast 'YOUR HOLLYWOOD PRO' with Jordan Gregory.

Before her move to Los Angeles, Sage spent time overseas; modeling, teaching english and working on ships. Sage holds a Bachelor or Arts degree, she also attended & graduated from the 2 Year Conservatory Program at the Actors Studio. Sage has worked on many indie films, theatre productions & awards shows in the US, Canada, Australia and Japan.